2020 has definitely brought new challenges, but that doesn't mean materials characterization research has come to a stop. Check out some of this year's new insights uncovered through Robo-Met.3D®'s automated serial sectioning, and tap or click on the title to read more. Contact us to learn more about how you can use Robo-Met to get the material insights you need today.

If you’ve ever wanted an expert introduction to 3D materials characterization, this is it. Using a well rounded approach, Dr. Ivanoff of Sandia National Laboratory lays out the rationale for 3D materials investigations and compares destructive (mechanical serial sectioning with Robo-Met) and non-destructive means to generate and quantitatively analyze such data. Placed in the larger context of relating material performance variability to microstructural variability, Dr. Ivanoff highlighted advantages of 3D characterization over conventional methods.

The article is well illustrated with practical case studies of failure analysis of a micro inductor, evaluation of cracks in critical glass to metal seals, and the emerging area of porosity in additively manufactured stainless steel samples. The ability to sample statistically relevant sample volumes, without trading out high resolution, offers unique insights in each of these cases.

Read the full article here, and learn more in this recording of Dr. Ivanoff's webinar.

Toughened ceramic matrix composites (CMCs) are poised to replace some traditional aerospace alloys. They offer advantages of high stiffness, increased strength-to-weight ratio, and enhanced fatigue performance. By engineering tailored, heterogenous microstructures, researchers have enhanced CMC performance.Because of their complexity, these CMCs require detailed characterization. Automated mechanical polishing-based serial sectioning with Robo-Met.3D has emerged as a well-established technique to obtain a reconstruction of three-dimensional (3D) microstructure in a wide variety of materials, including CMCs.

Extracting microstructural features such as fiber misalignment, fiber coating variation, or voids from image data requires robust and computationally efficient image analysis. This paper builds on previous work that used the Kalman-Groupwise algorithm to introduce a faster and reliable method. They used a CMC Robo-Met dataset generated at the AFRL. This dataset provides a basis to demonstrate that the algorithm is capable of tracking fibers in scenarios where fibers have twisted profiles and the spacing between adjacent images is variable. These fiber-tracking results show that the proposed DIC-based method outperforms the Kalman filter algorithm in both reliability and speed.

The authors acquired a Robo-Met dataset from ceramic matrix composites at the Air Force Research Laboratory. They used this data to train a computational neural network in object detection. Starting from the imperfect initialization, this work proposes a new easy-to-hard learning method. It incrementally improves the object detection in image sequences and videos by an unsupervised spatio-temporal analysis. This involves more complex examples that are hard for object detection for next-iteration training. The proposed method does not require manual annotations. Instead, the authors use weak supervisions and spatio-temporal consistency in tracking to simulate the supervisions in the CNN training. This new easy-to-hard learning method is then applied to problems such as autonomous vehicle vision systems and guidance.

Chapter 4 reports the work on characterization and quantitative comparison of fiber orientation fields. AFRL used serial sectioning to collect a stack of mosaics of a CMC sample. The authors proposed two methods to determine fiber orientation fields from this stack. One uses digital image correlation (DIC), while the other uses two-dimensional cross correlation. These methods are estimated to be at least 17 times faster than the previously published rule-based method developed for the characterization of fiber orientation. The authors further explored fiber tracking capability of the DIC method. They quantatively compared its performance with a more recent, state-of-the-art tracking method based on a Kalman filter in Chapter 5. They then applied both methods to the stack of mosaics of a continuous fiber reinforced polymer matrix composite (PMC) sample. The DIC clearly outperformed the Kalman filter method and was at least 40 times faster as well.

To fully understand the 3D phase structure of the precursor alloys, the authors used the Robo-Met system at KIMS to conduct automated serial sectioning on the Mg–36.7Cu precursor alloy. The water sensitivity of Mg makes magnesium alloy metallography challenging. However, the authors were able to create a 3D reconstruction of a 50 micron cube. They found that the MgCu2 phase in the Mg–36.7Cu alloy is interconnected within the Mg2Cu matrix. After measuring, they found volume fraction of the MgCu2 phase in the Mg–36.7Cu alloy to be ∼9.4%.

The np-Cu prepared from the Mg–36.7Cu alloy presented a duplex nanoporous structure with two types of np-Cu parts. They appeared to correspond to the Mg2Cu and MgCu2 phases existing before dealloying. This suggests that the type of pre-existing intermetallic phase in the precursor alloy strongly affected each np-Cu part constructed via dealloying. The duplex np-Cu sample having both np-Cu I and np-Cu II parts exhibited 12 times more compressive strength and 40 times greater flexural strength than the monolithic np-Cu sample without the np-Cu II part.

Duplex structural stainless steels (DP) are highly corrosion-resistant multiphase materials. They are used in chemical, petrochemical, marine, power generation, and nuclear industries due to their unique properties. Many researchers have representative volume element (RVE)-based micromechanical models to understand local mechanics that govern macroscopic deformation of DP steel. Researchers at the Universities of Georgia and Florida, as well as the US NRC, collaborated in this study. They investigated the mechanical stress/strain environment around ferrite/austenite interfaces. The researchers used an elastic finite element analysis approach (macro- and micro-levels) based on 2D slices of optical micrographs of DP steel material.

They started with a Robo-Met dataset of cast stainless steel CF-3, of about 100 1x1mm sections. They imaged these sections, separated by about 5 micrometers each, at a 100x magnification, and identified typical sections. Next they divided each 2D slice of 100 x 100 microns microstructure into 10 x 10 grid structures segmented for ferrite and austenite. This provided the basis for multilevel finite element analysis to investigate the interface stresses between the two phases of DP material.

Finite element simulations from both macro- and micro-levels revealed that interface stresses are affected by the phase's microstructure distributions. It was also found that stress localization occurred at the ferrite/austenite interfaces based on their distributions. 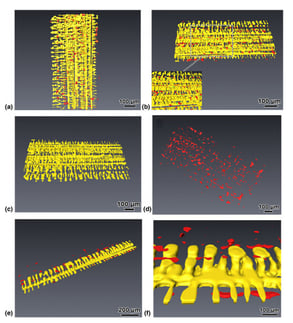 Robo-Met's unique technique proved valuable for researchers at the University of Birmingham. Its automated serial sectioning process allowed for in-depth 3D microstructural characterization. They used their Robo-Met.3D system to characterize CMSX-4® and the austenitic stainless steel HP microalloy. CMSX-4®, a nickel-based superalloy, is a registered trademark of the Cannon-Muskegon Corporation.

They determined the dendrite arm spacing, volume fraction of segregation, and fraction of porosity with Robo-Met. This technique not only increases the depth, scope, and level of detailed microstructural characterization, but also delivers microstructural data for modeling and simulation.

Dr. Dave Rowenhorst’s efforts at the Naval Research Laboratory have focused on understanding the the 3D graion structure of metals. In this work, he and his coauthors explain how automated serial sectioning combined with quantitative imaging such as using electron backscattered diffraction (EBSD), provides a unique capability to examine statistically large 3D datasets. The NRL’s system, shown here, features a Robo-Met.3D system used for efficient polishing and material removal in addively manufactured metallic samples. A robot then introduces the sample into a Tescan MIRA system for further analysis. In this article, a set of 308 serial-sections with EBSD, additively manufactured 316L steel is presented as an example, with more than 1700 defects and 30,000 grains are analyzed. The populations of defects are shown to be heterogeneously distributed, as are clusters of new grain orientations within the build.

Throughput study of diffusion along the twin boundaries in Mg-5Sn-0.3Li as-cast alloy and its effect on the homogenization during hot deformation

This study offers the effect of dendrite orientation selection on the defamation mechanisms and their subsequent effects on the homogenization of the dendritic structure during hot deformation processes. The results indicated that the solidification macro-texture has controlled by the dendrite growth pattern, which has effectively influenced the dominant deformation mechanisms (slip/twin activity). Dr. Su-Hyeon Kim’s group at KIMS used their Robo-Met.3D system to evaluate three-dimensional (3D) morphologies of the α-Mg dendrite, in the as-solidified microstructure and 3D analysis software (FEI, Avizo Fire 7). The microstructure is composed of the dendrite arms, α-Mg matrix, and precipitates (Li2MgSn and Mg2Sn). Interestingly, the boundary of the exhausted twins has been preferred for solute diffusion and has effectively contributed to the homogenization of the dendritic structure during hot deformation processes.

Want to talk about how Robo-Met's potential for your specific application?